UNDERSTANDING CHALLENGES AND OPPORTUNITIES TO MANAGE CMCH IN MALTA

Malta is a popular tourist destination, and the country depends heavily on its tourism industry in terms of GDP. In 2018 2.6 million tourists visited Malta , which was more than five times the number of residents. Malta has a rich cultural and natural heritage with no exception. The Maltese history and built-heritage attracts visitors that do not want to miss the combination of fortifications, temples and places where different worlds have been connected through the time. All the cultural heritage is place in a Mediterranean canvas which makes other visitors such as divers, bird watcher and seafood lovers, a big reason to come. Like on many islands, there is concern about direct and indirect human and natural impacts, especially when natural resources are limited. Climate change, such as changes in sea level and temperature, more variability and unpredictability in rainfall patterns and high(er) humidity and air temperature, especially in summer. Climate change is however not only associated with threats (and opportunities) for tourism; Malta also anticipates challenges for the agriculture and fishery sectors, and foresees problems with water resources and its population’s health.

M.2 Stories of the waterfront: Digitally guided tours in and around Marsaxlokk Bay.

The fishing village of Marsaxlokk is the selected case for PERICLES. It is one of the sixty-eight local units of Malta with a population of approximately 3,500. The first fishermen settled in Marsaxlokk permanently in the mid-19th century and the fishery community started to grow. Traditional daily practices relating to fishing and fishing boat handicraft have been passed down generations through teaching and training from fathers to sons. The activity of different fishing methods, mending the fishing net and the performing luzzu boats’ maintenance in the waterfront can still be seen in local people’s common daily lives and it is part of their cultural heritage, although not as vivid as it was in the past 50 years. The local community is commonly recognized as fishing village, with fishing culture among the most important heritages of Marsaxlokk. However, the traditional fishing culture is facing several challenges). Since the early 2000s, Marsaxlokk experienced a major influx of international tourists from cruises and mass tourism because of the promotion campaign from the tourism authority to brand Marsaxlokk as the only fishing village left in Malta. As tourism in Malta was expanding, the village has been in a constant transformation.

Since the development in the north has reached its limit in recent years, the less developed areas in the south show great potentials and opportunities and thus attract more people to move in. In addition, Maltese in general who seek less crowded places to live also want to move from the urban areas in the north to the south. Commercial businesses in the waterfront such as restaurants and hawkers have appeared and more tourists have come to enjoy the picturesque view of harbor with colorful luzzu and enjoy a freshly caught lunch at the waterfront. Moreover, some of the fishermen turned from the full-time fishermen to part-time fishermen and started to take tourists on to the traditional luzzu boats for a boat trip. Tourism has created many new employments in Marsaxlokk. The growth of new residents gradually changes the composition of the community in Marsaxlokk and also brings new practices. Nowadays, the place is known through tourism promotion since it is the only village in Malta that keeps the characteristics of a traditional fishing village.

The tourists visit here to enjoy the beaches, rocky cliffs, fresh seafood from the local restaurants, the fishermen lifestyle, the charming luzzu and the traditional Sunday market. Most of the main easy access attractions are located in the waterfront area of the village. All these attractions are composed by a series of rituals and practices that take place every day in the waterfront and are fundamental for the image of the fishing village as a tourist destination. Moreover, as a result of the tourism influence, fishermen and locals have also developed other tourism and commercially related activities at the waterfront. Selling souvenirs, handcrafts or traditional food, together with the boat tours that fishermen and their relatives organized, are some of the new ways in which the local community puts fish on the table. 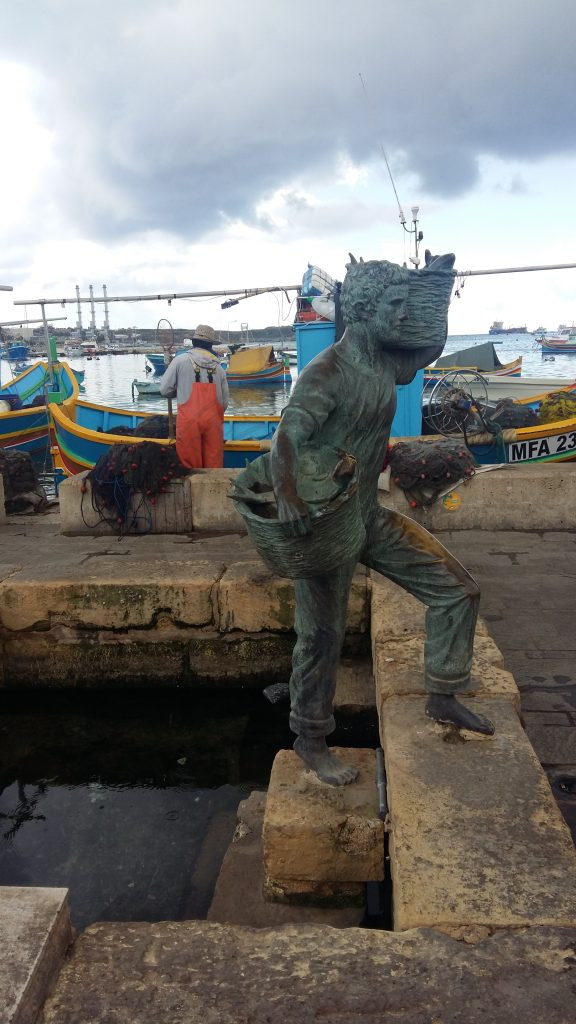